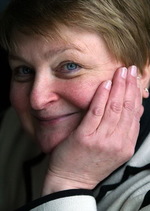 Berlin
Judith P. Loether (née Palya), 67, of Berlin, passed away on June 2,
2016 after over a year-long battle with cancer. She leaves two sons,
Kurt Loether of Lunenburg and Travis Loether and his wife Jes of
Douglas; her sister, Jean Carty of Collingswood, NJ, and brothers
Robert and William Palya of Wellington, AL. Born in Camden, NJ she
was the daughter of the late Albert H. Palya and Elizabeth A. Palya
(née Hiler).

She studied at the University of Wisconsin-Madison, married the late
John B. Loether, and lived in Bolton for 23 years before moving to
Berlin. Judy was an avid reader, extremely creative and organized,
working as a crafter in the Bolton Fair before joining the Bolton Fair
Committee as craft fair director for many years. She did volunteer
work with Earthwatch Institute digging up Jurassic fossils in Utah,
and did volunteer work for several organizations in Bolton and Berlin.

Judy’s father Albert Palya was one of three employees of the Radio
Corporation of America, an Air Force contractor, who were killed when
a B-29 Superfortress crashed in 1948 in Waycross, GA resulting in the
landmark legal case United States v. Reynolds which saw the formal
recognition of the State Secrets Privilege, a judicially recognized
extension of presidential power. Judy found the later declassified
accident report opening an investigation into the original case. In
2003 she laid a dedication plaque at the crash site, in 2008 testified
before the Senate Judiciary Committee's hearing on the State Secrets
Privilege, and was later interviewed and included in Barry Siegel’s
2009 book “Claim of Privilege”.

There will be no funeral and a private burial but there will be a
reception at her home at 93 Brook Lane, Berlin, MA on Friday, June 10,
2016 from 5:00 PM – 9:00 PM. Arrangements are under of the care of
Hays Funeral Home of Northborough. The online guestbook is available
at haysfuneralhome.com.