In Memory of
Jeanne L.
Maher (Whynot)
1927 - 2016
Click above to light a memorial candle.
Memorial Candle Tribute From
Hays Funeral Home
"We are honored to provide this Book of Memories to the family."
View full message >>>
Send Flowers
Menu 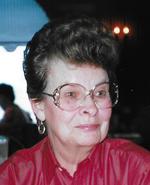 Northborough
Jeanne (Whynot) Maher passed away Thursday, October 20, 2016, after a long illness; she was 89 years old. Jeanne was born on April 5, 1927, the youngest of seven children, to the late Fred and Florence Whynot of Newton, MA. She was predeceased in 1978 by her husband, Frank H. Maher as well as a son, Joseph Maher, in 2005. Among her survivors she leaves her son, Bob Maher and his wife Susan, with whom she resided, as well as their family, Aaron Duffy of Natick, Morgan, Erin, Hayden, Bridjet and Colin Duffy of Shrewsbury, and many nieces and nephews. She also leaves behind her 21 year old cat, her constant companion, Brandy as well as her two dear and caring friends, Lily Reynolds of Northborough and Judy McLeod of Lancaster. Jeanne’s family wishes to extend their deep gratitude to her hospice team, Brenna, Brenda, and Danielle.
A Celebration of Jeanne’s Life has been planned for 10AM, on Tuesday, October 25, 2016, from the Hays Funeral Home, 56 Main Street, Northborough, MA. Memorial contributions in Jeanne’s name may be made to Salmon VNA-Hospice, 37 Birch Street, Milford, MA 01757.

To send flowers to the family or plant a tree in memory of Jeanne L. Maher (Whynot), please visit our Heartfelt Sympathies Store.