In Memory of
Armand W.
Charest
1927 - 2016
Click above to light a memorial candle.
Memorial Candle Tribute From
Hays Funeral Home
"We are honored to provide this Book of Memories to the family."
View full message >>>
Send Flowers
Menu 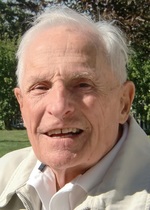 Northborough – Armand W. Charest, 89, passed away peacefully on October 30, 2016 at Wingate of Brewster. He leaves behind his loving wife of 65 years, Dorothy R. (Casey) Charest; his five children, Gerard Charest and (Marcia) of Escondido, CA; Cynthia D’Appolonia (Vincent) of Carmel , NY; Karen Mekjian (Warren) of Mashpee; Mark Charest (Sally) of Princeton; Leon Charest of Athol; 9 grandchildren, 13 great-grandchildren; his brother Gerald Charest (Barbara) of New Smyrna Beach, FL; many nieces and nephews. Armand was preceded in death by his sister Loretta and brothers, Alphonse, George, Leo, Paul and Robert. Born in Boston and raised in the Mission Hill section of Roxbury, he was the son of Albert and Lea (Roberts) Charest. He lived in Northborough for 41 years. Mr. Charest joined the Army in 1950 and served a tour of duty in Korea during the war in the 94th Military Police. Armand owned and operated Metropolitan Floor Service Co. for 10 years. He then worked as a Facilities Manager of Lincoln Plaza Shopping Center in Worcester for many years. He later worked for the Flatley Co. as a leasing agent and property manager. In his retirement, Armand drove a school bus in Northborough and Westborough for 10 years. Mr. Charest was a member of St. Rose of Lima Church and sang in the choir. He was also a member of the Knights of Columbus and a life member of American Legion Post #234 of Northborough.
Calling hours will be held on Friday, November 4, 2016 from 5-7 p.m. in Hays Funeral Home, 56 Main St. Northborough. A funeral Mass of Christian Burial will be held on Saturday, November 5, 2016 at 8:30 a.m. in St. Rose of Lima Church, 244 West Main St. Northborough. Burial with military honors will follow in Howard St. Cemetery. In lieu of flowers, memorial donations may be made to American Legion Post #234, 402 West Main St. Northborough, MA 01532.

To send flowers to the family or plant a tree in memory of Armand W. Charest, please visit our Heartfelt Sympathies Store.

US Army
The insignias listed here may be subject to copyright and / or trademarked. Those copyrights and trademarks are owned by the respective organizations.
Printable
Share on Facebook