Memorial Candle Tribute From
Hays Funeral Home
"We are honored to provide this Book of Memories to the family."
View full message >>>
In Memory of
Sanford Hewitt
""Sandy""
Russell
1931 - 2017
Menu
Send Flowers 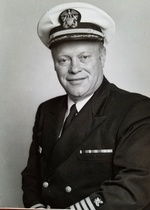 Northborough, MA – Sanford “Sandy” Hewitt Russell passed away peacefully on February 21, 2017 at UMass Memorial (University Campus) in Worcester, with his loving family by his side. He was 86. He leaves his devoted wife of 60 years, Betty (Brown) Russell; two loving sons, Hew Russell and his wife Michelle and their children, Logan and Lulu of Marion; Bill Russell and his wife Michelle and their children Jon, Hope and Nick of Sterling; his sister, Avery Morgan as well as his extended family. Sandy was born in Manchester, CT, son of Robert W. and Catharine A. (Hewitt) Russell and lived the past 54 years in Northborough. Mr. Russell graduated from Loomis Chaffee School in CT, class of 1950. He went on to earn a BA in Business from Babson College in 1953. He founded the Babson Sailing Club and was the team Captain. Sandy was a charter president of the Northborough Rotary Club. He was also a founding member of Northcourt Swim and Tennis Club in Northborough.

Sandy was extremely proud to serve in the United States Navy as a Supply Corp Officer and retired with the rank of Captain USNR. He served on the USS Albany CA123 and USS San Pablo AGS-30. His Naval and Naval Reserve time served was from 1953-1986.
Calling hours will be held from 4-7 on Wednesday, March 1, 2017 in Hays Funeral Home, 56 Main St. Northborough. His funeral will be held on Thursday, March 2, 2017 at 10 a.m. in the funeral home. Burial with military honors will follow at 1:15 p.m. in Mass. National Cemetery, Bourne. In lieu of flowers, memorial donations may be made to American Diabetes Association, 2451 Crystal Drive, Suite 900 Arlington, VA 22202 or donations.diabetes.org. For online condolences, please visit www.haysfuneralhome.com

To send flowers to the family or plant a tree in memory of Sanford H. Russell, please visit our Heartfelt Sympathies Store.