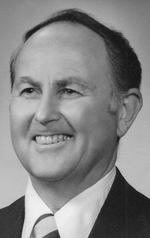 Uxbridge/Northborough – William Henry Leland II, age 87, passed away March 14, 2017 at Milford Regional Medical Center after a short illness. He leaves his devoted wife of 57 years, Elinor H. (Philip) Leland; his loving children, George P. Leland of Uxbridge; Jeffrey J. Leland and his wife Joan of Westmore, VT; Andrea M. Leland and her husband Billy Smith Jr. of Northborough; four grandchildren, William H. Leland IV, Kristine Leland, Jamie Smith and Billy Smith III. He is predeceased by his son William H. Leland III (2003), and his sister, Virginia Lapinsky. Born and raised in Worcester, he was the son of William F. and Amelia M. (Book) Leland. Mr. Leland graduated from South High School class of 1948. After high school, Bill enlisted in the army where he served his country in the Korean Conflict and was honorably discharged in 1952. Following his time in the service, Bill began his career at the former Rice Barton Corporation in Worcester as director of purchasing and moved on to become plant manager at Lodding Thermo Electron in Auburn. During his time with Lodding, Bill enrolled in the School of Industrial Management program at Worcester Polytechnic Institute, graduating in 1982. Shortly thereafter, Bill pursued his dream and opened W.H. Leland Automobiles in Worcester. Bill’s passion for automobiles, particularly vintage Cadillacs, stemmed from being a direct descendant of Henry M. Leland, the founder of the Cadillac and Lincoln automobiles. After 35 years in Northborough, Bill and Ellie moved to Uxbridge in 1996. A man of great integrity, he will be loved forever and greatly missed.
A funeral Mass will be celebrated Wednesday, March 22, 2017 at 10 a.m. at St. Mary’s Parish, 77 Mendon St. Uxbridge.( PLEASE GO DIRECTLY TO CHURCH.) There are no calling hours. Bill’s burial will take place privately in the parish cemetery. The family requests that flowers be omitted. Hays Funeral Home of Northborough is assisting the Leland family with arrangements.

To send flowers to the family or plant a tree in memory of William H Leland II, please visit our Heartfelt Sympathies Store.