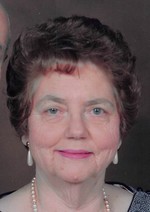 Northborough/West Falmouth
Mary L. Brigham, 89, passed away on May 6, 2017, at Cape Heritage Nursing & Rehabilitation Center in Sandwich, with family by her side. Her husband Paul L. Brigham Sr. died in 2002. She leaves her son, Paul L. Brigham Jr. and his wife Marilyn of Northborough; her daughter, Pamela B. Lippincott and her husband William III of Norton; two grandchildren, William C. Lippincott IV and his wife Amy; Ashley Mae Lippincott; two nephews and one niece. Born and raised in Clinton, she was the daughter of Harold E. and Neta (May) Laughlan. Mary graduated from Becker Jr. College, class of 1947. She and Paul moved to Northborough in 1951 where they raised their family. She lived here until 1983, before moving to W. Falmouth. Mrs. Brigham worked as a secretary at Peaslee Elementary School and continued in the Northborough Schools as an administrative assistant in the Special Education Dept. For the next twelve years, Mary worked in Special Ed. for Falmouth Public Schools until her retirement in 1995. She was a former member of Trinity Church and directed the junior choir. Mrs. Brigham was also a former member of the Northborough Women’s Club. She was an active member and advocate of the Falmouth Alzheimer’s Association.
A calling hour will be held on Thursday, May 11, 2017, from 10-11 a.m. followed by her funeral at 11 a.m. in Hays Funeral Home, 56 Main Street Northborough. She will be laid to rest beside her husband in Howard Street Cemetery. In lieu of flowers, memorial donations may be made to Alzheimer’s Association, P.O. Box 96011, Washington, D.C. 20090-6011 or www.alz.org/donate.

To send flowers to the family or plant a tree in memory of Mary L. Brigham (Laughlan), please visit our Heartfelt Sympathies Store.