Memorial Candle Tribute From
Hays Funeral Home
"We are honored to provide this Book of Memories to the family."
View full message >>>
In Memory of
Harvey F.
Chapdelaine
2017
Menu
Send Flowers 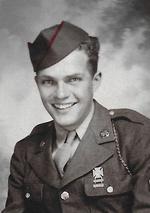 Northborough – Harvey F. Chapdelaine, a lifelong resident of Northborough, passed away on May 23, 2017 in Marlborough Hospital at the age of 92. His loving wife Claire P. (Trautner) Chapdelaine died in 2013. He leaves behind two sons, Wayne Chapdelaine and Concetta Callini of Washington, ME, Jeffrey Chapdelaine and his wife Darlene of Northborough; his daughter, Paula Darling and her husband Thornton of Millbury; also surviving are three grandchildren, six great-grandchildren, many nieces and nephews. He is predeceased by his granddaughters, Renee Chapdelaine and Becky Chapdelaine; his brother, Arthur Chapdelaine. Born and raised in the Chapdelaine homestead on Hudson Street in Northborough, he was the son of Arthur and Lydia (Seymour) Chapdelaine. He was affectionately referred to by his Maine friends as “Cool Harvey.” Harvey worked for the Commonwealth of Mass. as a surveyor for 20 years retiring in 1983. He graduated from Northborough High School in 1942 and was an active member of the Northborough Senior Center where he was loved by his many friends. Mr. Chapdelaine proudly served in the 557th Field Artillery Battalion during WW II. His unit fought in the Battle of the Bulge, the Invasion of Normandy, and Battle of Brest.
Calling hours will be held on Thursday, June 1, 2017 from 4-6 p.m. in Hays Funeral Home, 56 Main St. followed by a funeral with military honors at 6:00 p.m. Burial will take place privately. In lieu of flowers, memorial donations may be made to Alzheimer’s Association, 309 Waverley Oaks Rd., Waltham, MA 02452.

To send flowers to the family or plant a tree in memory of Harvey F. Chapdelaine, please visit our Heartfelt Sympathies Store.