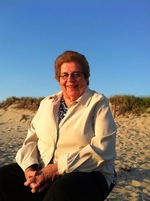 Berlin / Lynnfield
Joan E. (Thomas) Gilchrist, 84, of Berlin and formerly of Lynnfield, passed away unexpectedly on July 4, 2017, in Wellfleet, her long-time favorite vacation place; with her loving family by her side. Joan was born in Boston on April 1, 1933, a daughter to the late Edward R. and Margaret F. (Sawyer) Thomas. She spent her early years in Winthrop and was educated at Cushing Academy prior to attending Colby Jr. College.
Joan was an administrative assistant for Christian Education and Youth Ministries at the Episcopal Diocese of Massachusetts. She also previously worked for Genzyme Corp, and most recently during her retirement worked as a clerk at Lowes Variety and Meat Shop in Northborough where she enjoyed greeting all who entered. Above all she considered her most important position in life was being a devoted mother to her two daughters, Robin E. (Gilchrist) Bloomer and husband Jack Bloomer of Hopkinton and Susan (Gilchrist) Gaile and husband Jason of Columbus OH. In addition to her daughters she leaves five grandchildren, Sean, Ryan and Timothy Bloomer and Vivian and Henry Gaile, all whom she loved dearly. She also leaves her dear sister Peggy Hansen of Lynnfield/Wayland and brother Richard Thomas of Maine.
She was a longtime communicant of Church of the Nativity in Northborough and served in many roles there, with a passion for educational ministries. Joan never lost the capacity to love, kept a patient and positive attitude and was a friend to all. She looked forward to spending time vacationing with her family in Wellfleet.
Calling hours have been set for Monday, July 10, 2017, from 5-8pm in the Hays Funeral Home, 56 Main Street, Northborough. Joan’s funeral will be held on Tuesday, July 11, 2017, at 10am in Church of the Nativity, 45 Howard Street, Northborough, with Rev. Chad McCabe officiating.
Please consider making a donation in Joan’s name to Church of the Nativity, 45 Howard Street, Northborough, MA 01532. To leave a condolence please visit Joan’s Book of Memories at www.HaysFuneralHome.com

To send flowers to the family or plant a tree in memory of Joan E. Gilchrist, please visit our Heartfelt Sympathies Store.