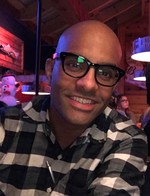 Northborough
"He that believeth in me, though he were dead, yet shall he live:"
Daniel P. Matthews, 36, beloved son of Raju Pullannimannil and Mercy (Mathew) Matthews of Northborough, passed away on July 10, 2017, from injuries sustained in a tragic accident while vacationing with his family in Lincoln, NH. Daniel was a lifelong resident of Northborough who attended the Northborough Public School system and then Framingham State University for undergraduate studies. Daniel was a passionate learner and enjoyed reading. He satisfied his curiosity for knowledge with hundreds of books in various subjects ranging from medicine to astronomy and space travel.
Daniel loved being with his girlfriend Sumer Shaikh. When he wasn't spending time with those he loved, he was in the kitchen, exploring new recipes and foods. His adventures in food took him through some of his most memorable experiences trying to learn about culinary habits around the world.
Some of Daniel's favorite pastimes were riding his motorbike and enjoying nature. Daniel was an adventurist and fondly recalled his skydiving experience. A licensed hunter, he looked forward to traveling out to California to spend time with his brother Jacob on a hunt.
Always slow to anger, Daniel would rather turn away to avoid an argument with someone. Daniel, a true practicing Christian and Pentecostal in faith, expressed Love through charity works. Daniel had a kind heart and was generous to those in need. As someone who enjoyed the company of others, he made friends quickly, saw the best in the people he met and inspired those he left behind.
Daniel enjoyed collecting Superman Action Figures all his life.
Besides his parents, Daniel leaves his two brothers, Thomas P. Matthews of Northborough and Jacob P. Matthews of Northborough and Los Angeles, CA, as well as uncles, Joseph P. Matthews of Northville, NJ and George Mathew of Philadelphia, PA and many uncles, aunts and cousins.
Calling hours have been set for 7-9pm on Friday, July 21, 2017 in Hays Funeral Home, 56 Main St, Northborough. Daniel’s funeral will held in the funeral home at 10am on Saturday, July 22, 2017, with burial following in Howard Street Cemetery, Northborough.
Daniel had a kind heart and generous to those in need. Please consider giving in Daniel’s memory to the Worcester Food Bank, 474 Boston Turnpike, Shrewsbury MA 01545.

To send flowers to the family or plant a tree in memory of Daniel P. Matthews, please visit our Heartfelt Sympathies Store.