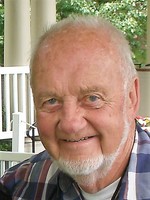 Northborough
Edward F. Wedge, 84, formerly of Northborough, passed away in Burlington, NC, on July 22. He had been residing with his son, Stephen and daughter-in-law in Mebane, NC for the past year-and-a-half. Born in Waltham, he was the son of the late John F. and Mary (Taylor) Wedge. He was a builder in Northborough for many years, as well as a member of the Vincent F. Picard American Legion Post 234 of Northborough and Rotary International. He served in the US Navy during the Korean War era aboard the USS Mitscher, DL2.
He enjoyed the Cape immensely and had a cottage there for years.
Survivors include his daughter, Cindy Drob, of Albermarle, NC, sons Stephen Wedge and wife Patricia of Mebane, NC and Norman Wedge and wife Jennifer of Vermont; grandchildren Michael Wedge, Daniel Wedge, Matthew Drob, Aimee Drob, Alex Wedge and Logan Wedge, as well as a sister, Hazel Stapel, of Pepperell. In addition to his parents, he was preceded in death by his wife, Nancy (Emmetts) Wedge, sister, Donna DiDuca; brothers Richard and John Wedge.
Edward’s funeral will be held at 11 AM on Saturday, August 12 in the Hays Funeral Home, 56 Main Street, Northborough. Burial with military honors will follow in Howard Street Cemetery, Northborough. A calling hour will be held from 10 AM to 11 AM, prior to the funeral service. The family will receive friends and relatives for a luncheon, beginning at Noon, at the Vincent F. Picard American Legion Post 234, located at 402 W Main St, Northborough.
In lieu of flowers, the family requests donations to your local Hospice. To view or to leave a condolence, please visit Edward’s Book of Memories at www.HaysFuneralHome.com.

To send flowers to the family or plant a tree in memory of Edward F. Wedge, please visit our Heartfelt Sympathies Store.