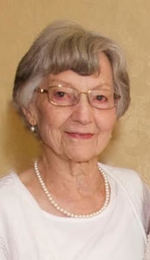 Mildred T. Sanders journeyed to heaven on August 21, 2017. She was born on November 17, 1926 in Northborough, the daughter of Elizabeth F. (England) Jones and Edwin A. Jones. Until marriage, she lived in the house on School Street in which she was born. She was a lifelong resident of Northborough until 2003. She moved to Boylston in 2005.

Millie graduated from Northborough High School in 1944. She was a graduate of Burdett College and Framingham State College. In her early years she was involved with a landscape business and a small farm. Over the remainder of her work life, she held positions in both the public and private sectors. Her last full-time position was with the Worcester Historical Museum. Following that, she worked part-time for the Northborough Senior Center, fully retiring in 1995.

Millie was a long-time active member of Trinity Church. She enjoyed volunteering as a member of the Friends of the Northborough Senior Center and particularly loved her years volunteering for Meals-on-Wheels.

Most of all, Millie treasured her large family and enjoyed family vacations, holiday and other family celebrations, the sports and other activities of her children and grandchildren. Her interests were varied: round dancing, square dancing, raising collie dogs, travel, trailer camping, walking, dining out with friends and family, gardening and the out-of-doors.

In lieu of flowers, donations can be made to Trinity Church, Tower Hill Botanic Garden, the Worcester Historical Museum or the Humane Society. To view or leave a condolence please visit Millie’s Book of Memories at www.HaysFuneralHome.com.

To send flowers to the family or plant a tree in memory of Mildred T. "Millie" Sanders (Jones), please visit our Heartfelt Sympathies Store.