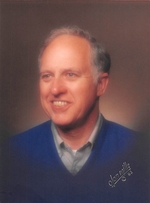 David Patch, a longtime resident of Northborough and proud Korean War veteran, passed away peacefully on September 13, 2017 with his beloved family by his side; he was 87 years old. He was the dedicated husband of nearly 61 years to Cornelia (Allen) Patch; their anniversary was to be celebrated on September 15th. David was born in North Quincy, MA on April 2, 1930 to the late Russell C. and Mabel J. (Schillhammer) Patch.
David attended the Thayer Academy, graduating in 1948. He then continued his education at Wentworth, earning his Associates prior to entering the Air Force. Having a lifelong love affair of flying, David excelled as a flight engineer and earned rank of Staff Sargent prior to being honorably discharged. He was proud to be a Green Hornet.
After proudly serving his country David worked as an electrical engineer for Honeywell for over 40 years. He and Connie enjoyed exploring Cape Cod, spending time at their home in West Yarmouth, square dancing with friends and the time spent with their family on Sandy Island at Lake Winnipesaukee. David was a longtime member of Siloam Masonic Lodge and took pride in maintaining his properties. He was most proud of the stonewalls he erected. His family will always remember David as a true gentleman who taught his children what it means to respect others and a man who truly adored being a “Papa” to his grandchildren. He was often seen playing with them as if he were a kid too. David had a smile for everyone he met.
Besides his wife Connie, David leaves behind a daughter Daryl A. Rynning and her husband Robert of Grafton and their children Melissa, Rachel, and Connor; a son Gary D. Patch and his wife Debra of South Grafton and their children Arieanna, Kenneth, Makenzie and Teeghan. He also leaves a brother Paul R. Patch of Virginia. A sister, Carole Gregor. predeceased David.
A funeral will be held at 10am on Monday, September 25, 2017 at First United Methodist Church, 120 West Main Street, Westborough with Rev. John Taylor officiating. A time of visitation will be held from 9:30-10am prior to the funeral. Burial with Military Honors will follow in Howard Street Cemetery, Northborough.
Hays Funeral Home, 56 Main Street, Northborough is honored to assist David’s family with arrangements. To read or leave a condolence, please visit David’s Book of Memories at www.HaysFuneralHome.com .

To send flowers to the family or plant a tree in memory of David Patch, please visit our Heartfelt Sympathies Store.