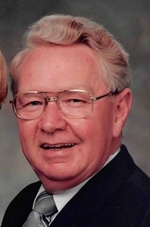 Northborough – Richard W. Sargent, a lifelong resident of Northborough, passed away on October 10, 2017 at UMass Memorial Medical Center – University Campus in Worcester, after a 2-year battle with lung cancer. He was 84. He leaves behind his devoted wife of 59 years, Marsha (Sibley) Sargent; his two daughters and their spouses, Darlene and Paul Murphy of Barre; Barbara and Andy Dowd of Northborough; seven grandchildren, Logan, Brendan, Kevin, Colleen, Alex, Jack and Molly; nieces and nephews. Dick’s brother Robert Sargent died in 1992. Born in the Sargent homestead on Hudson Street, he was the son of Harold and Ann (Murray) Sargent. Dick graduated from Northborough High School, class of 1952 and went on to earn his Associate’s degree from Quinsigamond Community College. He worked as a Payroll Manager for Raytheon Corp. in Lexington for 36 years, retiring in 1994. Dick proudly served in the U.S. Army during the Korean War. Mr. Sargent was a 43-year member of the Northborough Call Fire Department; a member of the American Legion Post #234. Dick was also an active member of the Northborough High School Alumni Association. He enjoyed working at Juniper Hill Golf Course in Northborough from 1994 until the present. Dick was devoted to his family. His greatest joy was being surrounded by them. He attended as many events as possible when his grandchildren were involved. Dick’s perfect vacation was to Disney World with “the whole gang.” Everything he needed in life was within an hour’s drive of his home. Calling hours will be held on Sunday, October 15, 2017 from 1-4 p.m. in Hays Funeral Home, 56 Main St. Northborough. His funeral Mass will be celebrated on Monday, October 16th at 10 a.m. in St. Bernadette Parish, 266 Main St. Northborough. Burial with military honors will follow in Howard Street Cemetery, Northborough. In lieu of flowers, memorial donations may be made to either the Northborough Food Pantry, 37 Pierce St. Northborough, MA 01532 or Northborough Firefighters Association, 11 Pierce St. (P.O. Box 103). For online condolences, please visit www.haysfuneralhome.com

To send flowers to the family or plant a tree in memory of Richard W. Sargent, please visit our Heartfelt Sympathies Store.