In Memory of
Richard C
Pierce
2017
Click above to light a memorial candle. 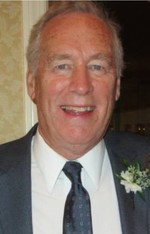 Richard Clark Pierce, 78
Northborough - Richard C. Pierce, 78, of Northborough, devoted and cherished husband and father, passed away Nov. 10, 2017, at home after a long illness.
Richard was born in Worcester on Aug. 20, 1939, to the late Lawrence A. Pierce and Helen (Clark) Pierce of Millbury. He leaves his high school sweetheart and devoted wife of 57 years, Kathleen (Prendiville) Pierce. He was the proud and loving Dad to three daughters and four sons: Valerie Dagle and her husband, William, of Northborough; Stephanie Pierce-Conway and her husband, Joseph, of Natick; Alison Pierce-Peak of Yarmouthport; Richard of Worcester; Jonathan and wife, Sherry, of Westerly, RI; Christian of Barre and Colin and wife, Kathy, of Shrewsbury. He also leaves 16 grandchildren, three step-grandchildren and three great-grandchildren. He also leaves his brothers Ronald and David of Auburn and Lawrence of Leesburg, FL, and many nieces and nephews.
Dick grew up in MIllbury and graduated in 1957 from Millbury Memorial High School where he played football, basketball and baseball. He graduated from the Worcester School of Business Science in 1959 and Ward Computer School. He also attended Worcester Junior College and Clark University in Worcester. He worked at David Clark Co. in Worcester for a few years as a technical writer and then 28 years in management at Roadway Express in Westborough, Nashua, NH, and Shrewsbury. He retired from Roadway at age 56 in 1995.
He was a passionate Red Sox and Patriots fan, rarely missing a game broadcast. Kathy always said that she was a baseball widow during the Red Sox season. After retirement, he took up golf as a pastime, and the highlight of his efforts was scoring a hole-in-one at Cyprian Keyes golf course in Boylston in 2015.
Richard was proud of his Yankee heritage and spent many hours researching and developing his family genealogy. He was a member of the Sons of the American Revolution for many years. He also was a member of the Founders and Patriots of America Society and the Society of the Cincinnati. Richard was a descendant of Richard Warren, a Mayflower passenger. He was a longtime member of the Northborough Historical Society and a lifetime member of the Millbury Historical Society. He was a member of St. Rose of Lima parish in Northborough.
The family would like to thank CareGroup Parmenter and hospice nurse Cheryl F. as well as Dr. Matthew Yurgelun and oncology nurse Amanda of Dana-Farber Cancer Institute for their compassionate care.
In lieu of flowers memorial gifts may be made in his name to the Dana-Farber Cancer Institute, P.O. Box 849168, Boston, MA 02284 or via www.dana-farber.org/gift.
Visiting hours are Friday, November 17th from 4 p.m. to 7 p.m. at Hays Funeral Home, 56 Main St., Northborough. His funeral Mass will be held Saturday, November 18th at 10 a.m. in St. Rose of Lima Church, 244 West Main St. in Northborough. Burial will follow in Howard Street Cemetery, Northborough.

To send flowers to the family or plant a tree in memory of Richard C Pierce, please visit our Heartfelt Sympathies Store.