In Memory of
Robert A
Denoncourt
1930 - 2017
Click above to light a memorial candle.
Memorial Candle Tribute From
Hays Funeral Home
"We are honored to provide this Book of Memories to the family."
View full message >>>
Send Flowers
Plant a Tree In Memory of Your Loved One
Click Here
Menu

Obituary for Robert A Denoncourt 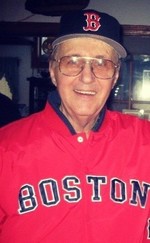 Templeton / Northborough
Robert A. Denoncourt, 87, formerly of Northborough, passed away peacefully with his family by his side on December 6, 2017. His beloved wife Shirley A. (McGrath) Denoncourt died in 2012. He leaves his loving children, Denise McCartney and her husband Wayne of Phillipston; Christine Giroux and her husband John Lorandeau of NH; Patricia Vehmeyer of Templeton; Robert Denoncourt and his wife Kathy of Baldwinville; Sharon Flanders and her husband Brian of Northborough. Also surviving are 12 grandchildren, 4 great-grandchildren, several nieces and nephews, and his 4-legged loyal pal Bosco. He was predeceased by his twin sister, Rosemarie Eberle and brother, Donald Denoncourt. Born in Marlborough, he was the son of Arthur and Rose (Vallee) Denoncourt. Bob lived most of his life in Northborough before moving to Templeton in 1989. He graduated from Holy Name High School in Worcester, class of 1949. Mr. Denoncourt was a self-employed carpenter working in his trade for 37 years. Bob served as a Sergeant in the Massachusetts Army National Guard. He was past president of the Northborough Fish and Game and past King Lion in the Northborough Lions Club. In the 1970s, Bob was a Massachusetts State Archery Champion. He also enjoyed trips to the beach in the summer and hunting in Vermont. Bob was an avid New England sports fan with is favorite being his beloved New England Patriots. He was an active member of Holy Cross Church in Templeton.
Calling hours will be held on Sunday, December 10, 2017 from 12:00 to 2:00 p.m. in Hays Funeral Home, 56 Main Street Northborough. His funeral Mass will be celebrated on Monday, December 11th at 10 a.m. in St. Bernadette Parish, 266 Main Street Northborough. Burial will follow in Howard St. Cemetery, Northborough. In lieu of flowers, memorial donations may be made in Robert’s memory to the Worcester Animal Rescue League, 139 Holden St, Worcester, MA 01606. For online condolences, please visit www.haysfuneralhomecom

To send flowers to the family of Robert A Denoncourt, please visit our Heartfelt Sympathies Store.