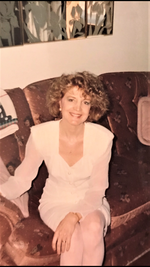 Shrewsbury
Linda D. (Ellis) Johnson, passed away on December 27, 2017 at Holy Trinity Nursing and Rehabilitation Center in Worcester, after a long illness. She was 72. She leaves her devoted husband of 23 years, Joseph Johnson of Worcester; her beloved daughter, Stephanie Sarli and her husband Gerardo of Shrewsbury; two grandchildren, Brianna Sarli and Marco Sarli of Shrewsbury, and great-granddaughter, Adrianna; her brother, Pierce Ellis and his wife Judy of Northborough; a stepdaughter, Michelle Johnson of Worcester; a stepson, Paul Johnson of Oxford; stepgrandchildren Steven Johnson, Amanda Johnson also of Oxford. Three nieces, Sharyn Lindsay of West Boyston, Cindy Birri of Shrewsbury and Tracy O’Neil of Northborough. Born in Sherbrooke, Quebec, Canada, she was the daughter of the late Charles T. Ellis and Gladys (Wheeler). Linda was educated at Sunnyside high school in Stanstead, Quebec, where she was an accomplished athlete in track and field earning numerous trophies and awards. She furthered her education in office administration from Stanstead College, Quebec. Mrs. Johnson formerly worked as an executive secretary for many years and most recently worked as a bookkeeper for Gerardo’s Italian Bakery from 1996 – 2011. Linda had a flair for interior decorating and creating floral arrangements. She also had an admirable fashion sense. Linda’s hobbies included dining out, movies, watching hockey, traveling and reading. She was passionate about animals and donated regularly to the Humane Society. She enjoyed her daily walks with her dogs. She lived for her family and friends and took great pride in her grandchildren with whom she doted on. Visitation will be private at Hays Funeral Home in Northborough. Burial in All Faiths Swedish Cemetery, Worcester will also be private. In lieu of flowers, memorial donations may be made to Alzheimer’s Association, 480 Pleasant Street Watertown, MA 02472. To share a memory or to sign the online guestbook, please visit www.haysfuneralhome.com

To send flowers to the family or plant a tree in memory of Linda D. Johnson (Ellis), please visit our Heartfelt Sympathies Store.