In Memory of
William Patrick
McGourty
2018
Click above to light a memorial candle.
Memorial Candle Tribute From
Hays Funeral Home
"We are honored to provide this Book of Memories to the family."
View full message >>>
Send Flowers
Plant a Tree In Memory of Your Loved One
Click Here
Menu 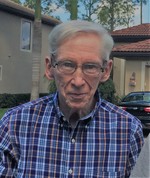 Northborough
William P. McGourty passed away at Rose Monahan Hospice in Worcester, on January 4, 2018, after a valiant struggle with Parkinson’s disease. He was 73 years old. He leaves behind his devoted wife of 45 years, Patrice (Hurley) McGourty; his loving daughter, Cara McGourty of New York City; two brothers, John McGourty and his wife Cindy of Naples, FL and Frank McGourty of Asheville, NC; two dear cousins, Maura Fitzgerald of Naples, FL and Ireland; Rosemary Fullerton of Norwood; nieces and nephews. Born in Boston and raised in Brookline, he was the son of Patrick and Mary (Hehir) McGourty, both of Ireland. Bill lived in Northborough for the past 39 years and served on the town’s Industrial Finance Authority. He graduated from Brookline High School, class of 1962, then joined the U.S. Army and later served in the U.S. Army Reserves. He earned a B.S. degree in Business Administration from Northeastern University in 1970. His professional career was managing operations for several manufacturing companies and he also owned and operated his own business for many years. Bill enjoyed walking, exercising, and reading. He was an avid Patriots and Red Sox fan. Bill’s great sense of humor will be fondly remembered. Above all else, Bill was a kind and loving person, as well as a true gentleman.

Calling hours will be held on Wednesday, January 10, 2018, from 5-7 p.m. in Hays Funeral Home, 56 Main Street, Northborough. His funeral will take place on Thursday, January 11th at 10:30 a.m. in the First Parish Church Unitarian, 40 Church Street, Northborough. Burial will be private. In lieu of flowers, the family requests that donations be made in Bill’s memory to the Michael J. Fox Foundation. To share a memory or to leave an online condolence, please visit www.haysfuneralhome.com

To send flowers to the family of William Patrick McGourty, please visit our Heartfelt Sympathies Store.