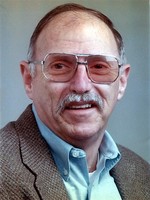 Richard J. (Dick) Cerasuolo passed away peacefully at the Rose Monahan Hospice Home on the morning of February 23, 2020, after a period of declining health; he was 80 years old. Dick was born and raised in Medford, a son to the late George and Anne (Higgins) Cerasuolo. He graduated from Christopher Columbus H.S. in Boston’s North End prior to enrolling at Northeastern University where he earned his B.A. in History. While still a student, Dick started as a sports reporter for the Boston Globe and a year later, the Malden Mass. Evening News. His professionalism and charismatic personality soon identified Dick as a “premier sports journalist” of the New England area; an identification that would span across his 40-year career.

In 1966 Dick transferred his journalistic skills to the Worcester Evening Gazette and ultimately, the Worcester Telegram & Gazette, where he continued to work until his retirement in 2000. During his career, Dick was responsible for covering the New England Patriots. While the Patriots were his primary beat, his passion was the Central Mass. College sports scene, namely WPI, Assumption College, and The College of the Holy Cross. Dick brought to life for his readers the careers of such Worcester hoop legends as Joe O’Brien, Andy Laska, Togo Palazzi, and Ken Kaufman among many others.

Dick’s dedication also followed into his personal life; no matter the schedule he would find time to make his daughter Katie’s basketball games and to get down to the field to watch his son Michael play and coach collegiate football. He was a dedicated husband of 39 years to the love of his life, his wife Mary (nee: Callahan) until her death in 2006. As busy as he was writing and traveling, Dick found time to relax and work on his home. His talents far surpassed sports writing; he was quite the handyman and found pleasure in maintaining his yard with an impeccable manner. His family will always remember those scavenger hunts to salvage old railroad ties.

Dick had numerous passions, one of which was restoring antique trunks and presenting them as gifts to his children, grandchildren, nieces, and nephews. In retirement, he enjoyed working his “little jobs”. For several years he served as the sexton to Westborough’s St. Stephen’s Episcopal Church and was a starter at Juniper Hill Golf Course in Northborough. He was a former member of St. Bernadette Parish, an active member of St. Rose of Lima Parish and was a longtime member and past Grand Knight of the Knights of Columbus, St. Augustine Council #5724, Northborough.

In lieu of flowers Dick’s family respectfully requests memorial donations be made to Rose Monahan Hospice, 10 Judith Street, Worcester, MA 01602. To leave a condolence or to share a story, please visit www.HaysFuneralHome.com.


A tribute from the Worcester Telegram may be found here: https://www.telegram.com/news/20200226/dick-cerasuolo-remembered-as-great-person-reporter-storyteller