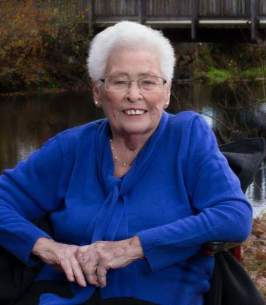 Share this tribute
Memorial Candles Lit for Jessie | SEE ALL
Light a Candle
"We are honored to provide this Book of Memories to the family."
— Hays Funeral Home
Funeral Details Memory Wall Photos & Videos Send Flowers

Obituary for Jessie A. Hughes (Eddy)

Print
On the morning of Friday, October 19, 2018, Jessie A. (Eddy) Hughes was called home by her Lord and Savior. At the time of her passing she was surrounded by the presence and care of her loving family. Jessie’s devotion to her family and her firm belief in God supported her and ultimately gave her peace over her 92 years. Her husband of 39 years, Thomas E. Hughes, Sr., passed away in 1985.
Jessie was born in East Thompson, CT on January 8, 1926, one of seven children to the late Walter H. and Mary F. (Shaw) Eddy. She was raised in Thompson and attended Thompson Public Schools, graduating with the Class of 1945.
After Jessie and Tom’s marriage in 1946, they purchased their home on Lower Gore Road. As a devoted wife, Jessie worked side by side with Tom, cutting wood, raising animals, gardening, and caring for their 10 children. To this day Jessie’s home has been considered the homestead where countless family gatherings and events have been held; a testament to the love and affection Jessie’s family has for her.
Jessie’s words and actions demonstrated her deep commitment to her faith. She was known for her impeccable flower gardens and neatly kept yard and guaranteed documentation of all family events as seen through the lens of her camera. Over 75 years and numerous generations of her family have been documented, through thousands of photographs, all which are cataloged and notated. She had a special place in her heart for Boston Terriers and in her younger years, enjoyed baking for her family.
Jessie leaves behind her ten children, Paul W. Hughes and his wife Phyllis of Webster, Thomas E. Hughes Jr. and his wife Cynthia of Douglas, Michael J. Hughes and his wife Virginia of Douglas, Kathleen R. Lamarre and her husband Paul Sr. of Thompson, CT, Stephen T. Hughes and his wife Shirley of Putnam, CT, Anne E. Dufault and husband William Sr. of Douglas, George A. Hughes and his wife Susan of Dudley, Irene J. Sorel and husband Roland of Webster, Mary B. Hughes-Donahue and husband Kevin of Danielson, CT, and Elaine D. Hughes of Webster.
She also leaves 14 grandchildren, 22 great grandchildren, and several nieces and nephews. She was preceded in death by her grandsons Thomas E. Hughes and Paul G. Lamarre, Jr, her three brothers, George, Walter and John Eddy and three sisters, Rose Munyan, Jeannette McCann, and Laura Furno.
A time of visitation with Jessie’s family will be held on Monday, October 22nd, from 5-7pm at TriState Baptist Church, 386 Quinebaug Rd, North Grosvenor Dale, CT. Her funeral will be held at 10am on Tuesday, October 23rd, at TriState Baptist Church. Jessie will be laid to rest beside her beloved husband in the East Thompson Cemetery.
Jessie’s family respectfully ask that memorial donations be made in Jessie’s name to the Tri-State Baptist Church’s Building Fund, 386 Quinebaug Rd, North Grosvenor Dale, CT 06255. To share a condolence or memory with her family, please visit Jessie’s Book of Memories at www.HaysFuneralHome.com.

To send flowers to the family of Jessie A. Hughes (Eddy), please visit our Heartfelt Sympathies Store.

We encourage you to share any memorable photos or stories about Jessie. All tributes placed on and purchased through this memorial website will remain on in perpetuity for future generations.

NL
To all the Hughes family: You are all in my prayers. Jessie, your now at home with our Lord Jesus Christ, with all the Saints.

Love and prayers.
We are thinking of you all during this sad time.
Tim and Leslie Hagood - Saturday October 20, 2018 via Heartfelt Sympathies
Share This:

We are very sorry for your loss.

Your family at Maines Westborough
Maines Paper and Food - Saturday October 20, 2018 via Heartfelt Sympathies
Share This:

CK
So sorry for your loss Mary and family. She was an awesome lady!
Cheryl Kurowski - Saturday October 20, 2018 via Condolence Message
Share This:

BM
Keeping you all in our thoughts and prayers during this difficult time.
Bruce & Sharon McPherson - Saturday October 20, 2018 via Condolence Message
Share This:

E
Dear Mary & family, sending our heartfelt sympathies to you all. Your mom was a very special woman as you know ! I got to know her from going to Tri-State Baptist.She always had a smile and was willing to listen & share her thoughts to me ,I always looked forward to seeing her. Now she is finally home w our Great God and she will still be watching us all ! RIP Jessie 💖🙏 Love Elaine & Dennis
Elaine & Dennis Bouchard - Friday October 19, 2018 via Condolence Message
Share This:

M
Dear Hughes Family , I'm so sorry for your loss. When we lose a loved one in death, we may become overwhelmed by grief. The Bible tells us that Jesus wept when his dear friend Lazarus died. Yet, just minutes later Jesus performed an astounding miracle of raising Lazarus  back to life!In doing so, he gave all mankind solid grounds for faith in the amazing promise he had made earlier when he said: “The hour is coming in which all those in the memorial tombs will hear [Jesus’] voice and come out.” (John 5:28, 29) May the precious hope of a resurrection to life on a paradise earth comfort you during this time.
MELISSA - Friday October 19, 2018 via Condolence Message
Share This:
1
Page 1 of 1
Share
×

Thank you for sharing!

Provide comfort for the family by sending flowers.

Or use your email:

Connect with families at their time of loss. By subscribing to email updates, you will receive two daily updates containing all new stories, photos, candle lightings, condolences, and more.

You are welcome to call us at 1-508-393-6591 at any time, for immediate assistance.
For general information, if you prefer, you may also email us at
jeff@haysfuneralhome.com