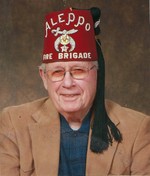 Alan P. Longworth, 87, a longtime resident of Northborough and the beloved husband of 52 years of Carole (Chisholm) Longworth, passed away on Saturday, May 2, 2020. Alan was born in Framingham and raised in Saxonville, the eldest of four children to the late Leslie and Alberta (Weeks) Longworth. He graduated from Framingham High School, Class of 1951.

Prior to retirement, Alan was a pipefitter for Local 537. After retirement, Alan became an accomplished custom knife maker frequently attending knife shows throughout New England. He was a U.S. Navy veteran and a member of the VFW, having served during the Korean War. Alan was also was proud to be a longtime member of the United Brethren Masonic Lodge and the Aleppo Shrine where he actively served in the Fire Brigade.

Due to the current pandemic, no services are planned. Memorial contributions, in Alan’s name, may be made to the Shriners (https://lovetotherescue.org).