To share your memory on the wall of Christopher L. Ferragamo, sign in using one of the following options:

Provide comfort for the family by sending flowers or planting a tree in memory of Christopher L. Ferragamo

Provide comfort for the family by sending flowers or planting a tree in memory of Christopher L. Ferragamo

Christopher L. Ferragamo, 51, passed away on Thursday, October 24, 2019, at Saint Vincent Hospital after a period of declining health. Christopher was born in Revere, MA, the son of Arthur A. and Mary E. (Sanborn) Ferragamo. ... Read More
WESTBOROUGH

Christopher L. Ferragamo, 51, passed away on Thursday, October 24, 2019, at Saint Vincent Hospital after a period of declining health. Christopher was born in Revere, MA, the son of Arthur A. and Mary E. (Sanborn) Ferragamo. He was raised in Piscataway, NJ and was a 1986 graduate of Piscataway H.S. prior to earning his BA Degree in Liberal Arts at The New School, Eugene Lang College of Liberal Arts in New York City.

Christopher, formerly of Howell, NJ, loved spending time at the beach, routing for the N.Y. Islanders and debating politics. He moved to Northborough four years ago. For many years, Christopher devoted his time to his son Van; as a Hockey Dad to his son Van’s passion for hockey and his many other youth sports interests. He was a dedicated and loving father with a great sense of humor. Christopher had a broad and eclectic taste for music, film and art. You could always catch him reciting lines from his expansive memory of movies, rattling off sports trivia or historical events and dates. Van’s name was derived from his favorite composer Ludwig Van Beethoven.

In addition to his son, Van-Ian, Christopher is survived by his mother, Mary, of Long Branch, NJ; a sister, Melissa Domenech of Howell, NJ; an aunt, Helen Mulligan of Woburn, MA; an uncle, John Mulligan of Merrimack, NH; Van-Ian’s mother, Teresa Ferragamo of Northborough, MA and many extended family members of the Ferragamo and Gargiulo families. Christopher was preceded in death by his father, Arthur.

A funeral Mass will be celebrated at 10 a.m. on Thursday, October 31, at Saint Rose of Lima Parish, 244 W. Main Street, Northborough.

To send flowers to the family or plant a tree in memory of Christopher L. Ferragamo, please visit our Heartfelt Sympathies Store.

We encourage you to share your most beloved memories of Christopher L. Ferragamo here, so that the family and other loved ones can always see it. You can upload cherished photographs, or share your favorite stories, and can even comment on those shared by others.

Love Always, Melissa, Richie, Gia, & Thaddaus, Love, the Blome family, and other have sent flowers to the family of Christopher L. Ferragamo.
Show you care by sending flowers

Posted Oct 30, 2019 at 08:02am
Our thoughts and prayers are with you and your family during this difficult time. 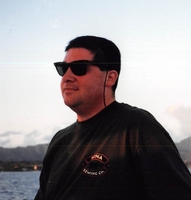