To share your memory on the wall of David Bedrosian, sign in using one of the following options:

Dave was an amazing husband and father, deeply loved and adored by his wife of 26 years, Kathy (McWalter), and... Read More
Northborough.

Dave was an amazing husband and father, deeply loved and adored by his wife of 26 years, Kathy (McWalter), and by his son and the joy of his life, Sam. He was the cornerstone of his large, extended family, leaving behind his brother Peter and his wife Deborah of Whitinsville, brother Richard and his wife Bettyjean of Whitinsville, sister Nancy and her husband Richard of Burlington, aunt Sylvia Bedrosian of Whitinsville, and best friend Paul Mandrafino and his wife Lisa of Pennsylvania. He also leaves behind his sister-in-law Diane Ciampi and her husband Doug of Westminster, his brother-in-law Richard McWalter of Concord, and his many nieces, nephews, and grandniece, all of whom he loved to spend time with.

Dave was born on December 29, 1959 in Whitinsville to the late Peter and Suzanne (Malkasian) Bedrosian. He graduated valedictorian from Northbridge High School and earned a B.S. in Computer Science from the Massachusetts Institute of Technology, where he was a member of the Beta Theta Pi Fraternity, whose members meant so much to him. He worked at a number of technology companies throughout the Boston area, including Cognex Corporation, where he met his wife, Kathy; IDC; Trip Advisor; iRobot; and most recently, Amazon Robotics. He was awarded four U.S. patents for technology and was recognized with numerous accolades and awards throughout his career.

As dedicated as he was to his work, Dave’s top priority was spending time with his family and creating a wonderful life for them. One of his favorite roles was serving as a coach for his son’s baseball and basketball teams. He also greatly enjoyed cooking and baking for his family; spending time outdoors together kayaking, hiking, and swimming; traveling to amusement parks to ride the tallest and fastest roller coasters with his son; and hosting regular game nights, pool parties, and holiday gatherings for family and friends.

Dave also pursued many interests, including earning a private pilot’s license and flying his Cessna 172 airplane; playing and developing video games; singing, playing the guitar, and writing songs; reading and continuously learning; and golfing. He was a lifelong member of the Soorp Asdvadzadzin Armenian Apostolic Church in Whitinsville, where he served for many years as Treasurer on its Board of Trustees and devoted his time to the church’s many annual bazaars, summer picnics, and other events.

What Dave will be most remembered for, though, was his great sense of humor and his exceedingly kind, humble, generous, loving, and thoughtful nature. He was always watching out for his family, friends, and anyone in need, regularly and quietly offering assistance in any way possible, whether it was helping with a move, providing rides to appointments, fixing a computer, mentoring, paying a bill, offering advice, teaching a skill, donating to causes, providing encouragement, or simply showing compassion toward someone who needed to be uplifted. He cared genuinely and deeply about all of those around him.

Dave was a truly good man and a fine example to everyone who knew him.

Dave’s funeral will be held Tuesday, August 13th at 10:30 am at the Soorp Asdvadzadzin Armenian Apostolic Church in Whitinsville and burial will follow in Howard Street Cemetery in Northborough. Calling hours are Monday, August 12th from 6:00 pm to 8:00 pm at Hays Funeral Home, 56 Main Street, Northborough.

In lieu of flowers, gifts may be made in memory of Dave to the Northborough Food Pantry at www.nfpantry.org, or to support brain tumor research conducted by Dr. Patrick Wen at Dana-Farber Cancer Institute, P.O. Box 849168, Boston, MA 02284. Please write checks to Dana-Farber and include Dr. Wen in the memo section. To give online, please visit www.dfci.org/give.

We encourage you to share your most beloved memories of David here, so that the family and other loved ones can always see it. You can upload cherished photographs, or share your favorite stories, and can even comment on those shared by others.

Posted Aug 15, 2019 at 03:29pm
I will remember Dave for his gentle nature, smile, joy of baking and discovering new coffee flavors ... and most importantly his love and devotion to Kathy & Sam. Gone too soon. Paula Gardner
Comment Share
Share via:

Posted Aug 12, 2019 at 04:14pm
Kathy, Sam and family, we are so deeply sorry for your loss. Our thoughts and prayers are with you all. Judy, Emmett and Carson
Comment Share
Share via:
LP

Posted Aug 12, 2019 at 12:13pm
Dave was a wonderful guy - I'm very sorry and saddened to see him go . I still remember when he learned the Japanese alphabet "on the plane ride over". "Dave's a great guy - you should get to know him..."
Comment Share
Share via:
SR

Posted Aug 11, 2019 at 09:51pm
Please accept our most heartfelt sympathies for your lossour thoughts are with you and your family during this difficult time.

Saima and Zubsir Rathore purchased flowers for the family of David Bedrosian.

Posted Aug 11, 2019 at 07:22pm
I was saddened to read about David's passing. I went to Northbridge High and graduated with him. He always appeared to be a gentle soul. May God bless his family and keep them in our prayers. May God offer peace to those who knew and loved him. Rest in peace David. Amen!!!
Comment Share
Share via: 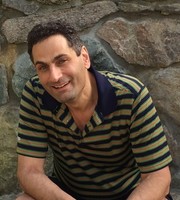