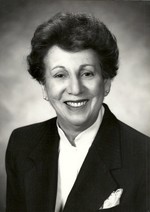 Elinor H. (Philip) Leland, affectionately known to her family and friends as “Ellie”, passed away peacefully on May 4, 2020. She had recently celebrated her 91st birthday.

Born and raised in Worcester, Ellie was the daughter of George and Madeline (Tarkanian) Philip. After graduating with the Commerce High School’s Class of ’47, Ellie began her working career at the former Rice Barton Manufacturing Co where she worked as the executive secretary to the President, Charles Barton. It was here that she met her future husband, Bill. They relocated to Northborough in the early 1960’s where they raised their family. Ellie enjoyed spending time researching antique furniture, visiting historic homes and museums, and attending antique car shows with Bill.

In later years, Ellie was an executive secretary at Algonquin Regional High School and then at the former NEC Co in Boxborough until her retirement in 2000. After 35 years in Northborough, Bill and Ellie moved to Uxbridge where she became an active member of Saint Mary Parish, volunteering on the church’s bereavement committee.

At this time all services will be private. Ellie will be laid to rest beside Bill in Saint Mary Cemetery, Uxbridge.
A memorial Mass will be celebrated at a future date. The family requests that flowers be omitted. Arrangements are under the care of Hays Funeral Home, 56 Main Street, Northborough. To share a memory or to leave an online condolence, please visit www.haysfuneralhome.com.