To share your memory on the wall of Frederick Titsworth, sign in using one of the following options:

Frederick L. Titsworth, Jr passed away peacefully at home in Northborough on Monday, June 15, 2020, after a period of declining health; he was 86 years old. Frederick was born in Fort Wayne, Indiana, the son to the late Frederick L. and Rena E. (Reinoehl) Titsworth. He was raised in Lakewood, Ohio and was a 1956 graduate of Lakewood High School prior to earning his engineering degree at Yale University. Frederick then enlisted in the U.S. Navy where he served as a Radar Flight Engineer and was an Aviation Officer. After being honorably discharged Frederick enrolled at Northeastern University where he was awarded his MBA.

For most of his career Frederick worked as a software engineering manager. His first years were at General Electric while the majority of his career was at Raytheon’s Bedford and Burlington locations. After his retirement Frederick and his wife, the late Janet L. (McDanel) Titsworth, returned to Angola, Indiana where Frederick built Janet her dream home on Lake Gage. It was at this lake that the couple met as teenagers and subsequently shared 60 years of marriage together until Janet’s death in 2017.

Frederick enjoyed spending time on the lake, in his sailboat, going for a swim and even waterskiing up to age 68. He enjoyed restoring vintage Mercedes automobiles, spending a quiet morning reading the paper, or working around the house, an occasional game of golf and attending boat and car shows with friends. He was active at St. Anthony of Padua Parish where he participated in the men’s retreat. Frederick found interest in following the stock market, keeping up with the current world news on FOX, listening to classical music, smoking his pipe, and settling back with a good Sherlock Holmes novel and a glass of scotch.
Frederick is survived by four children, Diana L. Langer of Northborough, MA, Alexander D. Titsworth of Austin, TX, Elizabeth A. Moore of Gloucester, MA, Mary C. Visnauskis of Easton, MA; eight grandchildren and 1 great-grandchild. He was preceded in death by a son, Frederick L. Titsworth, III.

Calling hours, with social distancing guidelines, will be held from 3-5PM on Sunday, June 21, at Hays Funeral Home, 56 Main Street, Northborough. A funeral Mass will be celebrated at 10AM on Monday, June 22, at St. Rose of Lima Parish, 244 W. Main Street, Northborough. Frederick will then be laid to rest beside his beloved Janet in Lake Gage Cemetery, Angola, Indiana, under the direction of Weicht Funeral Home, Angola, Indiana.

To send flowers to the family or plant a tree in memory of Frederick L. Titsworth Jr., please visit our Heartfelt Sympathies Store.

Receive notifications about information and event scheduling for Frederick

We encourage you to share your most beloved memories of Frederick here, so that the family and other loved ones can always see it. You can upload cherished photographs, or share your favorite stories, and can even comment on those shared by others. 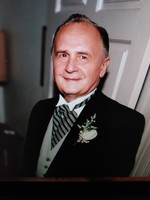