To share your memory on the wall of Gerhard Mollenhauer, sign in using one of the following options:

Gerhard H.P. Mollenhauer, longtime resident of Northborough, passed away in his home on January 22, 2020, at the age of 86. Gerhard was born in Dabendorf, Germany, the eldest son of Ernst and Klara (Burkhardt) Mollenhauer. G... Read More
NORTHBOROUGH

Gerhard H.P. Mollenhauer, longtime resident of Northborough, passed away in his home on January 22, 2020, at the age of 86. Gerhard was born in Dabendorf, Germany, the eldest son of Ernst and Klara (Burkhardt) Mollenhauer. Gerhard is survived by his devoted wife of 60 years, Shirley A. (Betts) Mollenhauer; their daughter, Kimberly Schortmann and husband Mark; brother Joachim Mollenhauer and sister Christel Breitenborn - both whom reside in Germany, as well as many nieces and nephews.
In his early twenties, Gerhard and his friend Bruno escaped East Germany with only the clothes on their back, seeking asylum in West Berlin. They were flown to West Germany, where they traveled to internment camps, working their way throughout the country. In 1957 they both gained sponsorship to the United States through the efforts of Newton-based missionaries. Gerhard then met the love of his life at Mosely’s in Dedham, by asking her to dance. He and Shirley married in 1960 and moved to Waltham before finally settling in Northborough in 1963. Jerry, as he was nicknamed, and Bruno continued their lifelong friendship, as Bruno and his family settled in Waltham.

Jerry worked as a master tool and die maker at the Waltham Watch Co. and then at Polaroid – where he retired. He attended MIT for a couple years, but work, family and becoming a citizen pulled him away from his dream of attaining an engineering degree. Not getting his college degree only strengthened his resolve for his daughter to go to college – always telling her that “she had nothing to worry about except her education”.
He loved sports and was an avid tennis player, playing Sundays at Dean Park with his friend Vern Underwood. He also enjoyed skiing, watching the Patriots and bowling. He played on various bowling leagues in Waltham - many times with Bruno as a teammate.
Jerry greatly enjoyed traveling. He once purchased a colleague’s Cadillac, packed up his family and spent 2 weeks traveling to California and back. But his real love was the ocean - especially spending time at Horseneck Beach. After a cruise to Aruba and Bonaire, he and Shirley fell in love with the islands, buying timeshares on both – making many good memories and many great friends.

Jerry didn’t take friendships lightly. Shirley and he made wonderful friends through their years living in Northgate, as well as through Polaroid. When you were his friend, you were his friend for life.
Growing up outside Berlin during World War II, and watching his parents lose everything, he valued his possessions, and when he bought something, he made sure it lasted - believing in repairing instead of replacing. His most prized possession was his ’74 VW convertible Beetle. He had it restored over 10 years ago and he and Shirley spent many summers tooling around town with the top down.

Visitation will be held from 5-7 p.m., followed by a memorial service on Wednesday, January 29, at Hays Funeral Home, 56 Main Street, Northborough. The Mollenhauer family respectfully requests that donations be made to local animal rescues or a charity of your choice in lieu of flowers. To leave an online condolence, please visit www.HaysFuneralHome.com.
Read Less

We encourage you to share your most beloved memories of Gerhard here, so that the family and other loved ones can always see it. You can upload cherished photographs, or share your favorite stories, and can even comment on those shared by others.

Posted Feb 01, 2020 at 09:39pm
i met Gerry through y brother Gary Karagosian who lived next door,
When I would come home on leave Gerry and i would get together and talk about germany where i was once stationed. Then after getting out of the service I would always see him doing his lawn and he would come to see me and my brothers house. Every tome i came to Northborough i would either drive a corvette jaguar and delorean and he would say I was into cars and loved showing them..
He got his VW done and was proud of that car.
Gerry was a fine man and he and my brother were good friends.
there is a poem i would like to add that says alot about gerry.
To his family I will miss him.

to Gerrys family. This is what I think gerry would be saying right now,

Posted Jan 31, 2020 at 10:24am
At Polaroid, Jerry was always a pleasant smiling problem solver in the machine shop and tool and die shop. He and his fellow shopmates not only tackled and worked with intricate details but accompanied every session with a joke and a smile. I'll always remember those pre-Christmas potluck receptions in the shop, to which I was always invited. Good memories of a wonderful man.
Comment Share
Share via:

Posted Jan 29, 2020 at 01:09pm
I didn't get to know Jerry but from people have told me, he was outstanding man. My condolences to the rest of the family and aunt Shirley. Sincerely Patrick Betts
Comment Share
Share via:
HS

Posted Jan 29, 2020 at 12:53pm
With loving memories of "Gerhard Mollenhauer", A wonderful person who lived life to the fullest. From the Kehlenbeck Family.

Peaceful White Lilies Basket was purchased for the family of Gerhard Mollenhauer.

Posted Jan 26, 2020 at 08:30pm
My dearest Jerry my heart aches for your passing you hid the fact you were very sick when you called me I treasure your calls you were so special to me I even work with you and dad all those trips you took with my parents the stories and laughter you guys had I'm so grateful my dad had a best friend with jerry and Shirley I will be checking on you I love both of you Rest in Peace my dear Jerry forever in my Heart all my love Debbie Bondi O'Neill
Comment Share
Share via: 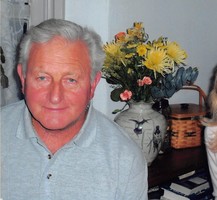