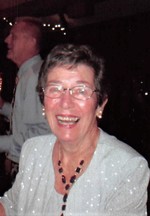 Gloria M. (Cullati) Genco, 94, a longtime resident of Northborough and formerly of Duxbury, passed away peacefully at her home on Saturday, October 5, 2019. She was the devoted wife of 54 years to John J. Genco until his death in 2010.

Gloria enjoyed the ocean, time on the beach with her family, and flowers, the Rose of Sharon being her favorite. She was an avid reader, found pleasure in a good game of golf and was an excellent cook. Most important to her was her beloved family.