To share your memory on the wall of Howard Stone, sign in using one of the following options:

Howard E. Stone, Jr, 83, known to all as “Howie”, passed away on March 5, 2019, at Marlborough Hospital after a short period of declining health. Howie was a son to the late Howard E. and Vivian (Boule) Stone and was a... Read More
Northborough

Howard E. Stone, Jr, 83, known to all as “Howie”, passed away on March 5, 2019, at Marlborough Hospital after a short period of declining health. Howie was a son to the late Howard E. and Vivian (Boule) Stone and was a lifelong resident of Northborough.

Howie worked hard all his life, from a very young age on the family turkey farm right up to his retirement. In retirement he wanted to do what gave him the most pleasure, farming. He moved back to the family farm and raised beef cows as well as having other animals that he loved. There he enjoyed gardening, operating his heavy equipment, his John Deere tractor, haying and most of all hosting family holidays and any other reason to just get together.

He was a very humble man, kind, honest and caring. He lived his life in the most simplest of ways. He most enjoyed time spent with family and friends. Many weekends and vacations were spent doing the things he loved; camping, fishing, neighborhood clam bakes, cookouts, snowmobiling, skating parties, visits to Cape Cod and Lake Sunapee NH. He loved holidays at home, Sunday dinners and watching his favorites, the Bruins and Patriots.

Howie was many things to many people. He was a loving and devoted son; the steadfast husband of 62 years to Susanne R. (Forleo) Stone and a loving and supportive father to his three children, Brian Stone Sr. and his companion Holly Colt of Charlton, MA, Dianne (Stone) Cofer and husband Keith of Northborough, and Lisa (Stone) Brochu and her husband James of Upton. His greatest joy was being Pepere’ to his seven grandchildren, BJ, Michelle, Jennifer, Michael, Matthew, Lindsey and Danny, all of whom he was so proud of and adored. He was a good brother to his siblings, Carol Hamelin, Jane Blakeley, Robert Stone, Donna Deneen and Patricia Hoffman. Howie’s brother, George Stone, preceded him in death.

He left us too soon, but he gave us a gift each day we had with him after he took ill. We know in our hearts his time to leave us was his own. He will be sadly missed by all who knew him.
Read Less

We encourage you to share your most beloved memories of Howard here, so that the family and other loved ones can always see it. You can upload cherished photographs, or share your favorite stories, and can even comment on those shared by others.

Posted Mar 09, 2019 at 10:30am
To Sue and the family, the passing of Howie has left us all with a deep sadness, but not as much as his loved ones feel. It is my hope that our messages, thoughts and prayers help to bolster you at this time.

My memories of Howie go back several years and they are wonderful. He was a strong, kind man whose stature rose even higher that his size -- casting an exceptionally long shadow. You always knew where you stood with him. He not only protected his family but those around him and his care for his home town was ever-present.

When we spent a morning together taking photos, Howie told me of his great fondness for his animals with a special pride for his cows.

His love blanketed many, and Sue was pinnacle of that love. A lucky woman, to be sure.

He will always hold a place of honor in my heart. Rest peacefully, my friend.

Tina purchased flowers for the family of Howard Stone.

The Algonquin Lunch Ladies purchased flowers for the family of Howard Stone.

The Deneen Family purchased flowers for the family of Howard Stone. 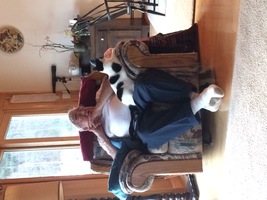 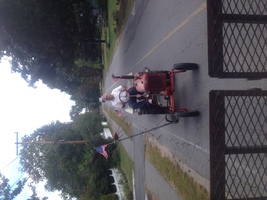 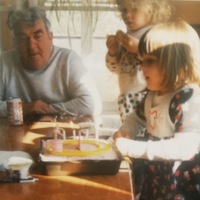