To share your memory on the wall of John Railsback, sign in using one of the following options:

John Stuart Railsback passed away February 9, 2020 after a short battle with lung cancer. He was 73 years young. John was born and raised in Wellesley, Massachusetts, the son of the late Neal and Barbara (Varney) Railsback... Read More
NORTHBOROUGH

John Stuart Railsback passed away February 9, 2020 after a short battle with lung cancer. He was 73 years young. John was born and raised in Wellesley, Massachusetts, the son of the late Neal and Barbara (Varney) Railsback. Widely known as his mother’s “prettiest baby”, he graduated as Best Groomed of the Wellesley High Class of 1964.

At Rockford College in Illinois, he found lifelong friends, and more importantly, his wife Barbara. He received his MBA at Syracuse before starting his working life at the family business of New England Road Machinery. But he found his calling as a “leasing guy” for US Leasing in the 1980s and GE Capital in the 1990s and 2000s. There he forged a successful career out of two of his greatest talents: time value of money calculations and witty repartee.

John and Barbara made a home and a life in Northborough beginning in 1973. His sons Jeff and Mark enjoyed childhoods on Captain Eager Drive and Coram Farm Road. John spent most of those years fixing the go kart or cleaning the fish tank. In 2004 John became a Grampa. He relished the role and took every opportunity to teach his grandkids repetitive humor. Repetitive humor. His grandchildren learned that a good fart joke is still funny no matter how old you get.

In retirement, John and Barb enjoyed traveling the world. They biked the rail trails in the fall and spring and skied in the winter. Summers were spent in Kennebunk where John and Barb lovingly transformed his parents’ house into a second home that became a favorite destination for all family members.

Music was a big part of John’s life. In his youth, he sang and played guitar in a folk group and served as the organist at church camp. Throughout his life, he found joy in playing his piano and keyboard at home. He and Barb attended many concerts, musicals and symphonies over the years. John loved a Miller High Life in the afternoon and a scotch in the evening. He loved to putter around the house, living his mantra that life is but a constant series of maintenance projects.

John is survived by his wife Barbara of 49 glorious years; two sons, Jeff and his wife Donnella of Boylston and Mark and his wife Katie of Midlothian, VA; his grandchildren Jimmy, JD, Samantha and Matty; and a sister, Judi Finn and her husband Tom of Ft. Meyers, FL. John was preceded in death by his brother Alan.

The Railsback family respectfully request that in lieu of flowers, donations may be made in John’s memory to Rockford University, 5050 East State Street, Rockford, IL 61108 (www.legacy.rockford.edu) or the American Cancer Society (www.cancer.org). To share a story or to leave a condolence for John’s family, please visit www.HaysFuneralHome.com.
Read Less

To send flowers to the family or plant a tree in memory of John Stuart Railsback, please visit our Heartfelt Sympathies Store.

Receive notifications about information and event scheduling for John

Posted Feb 13, 2020 at 07:12am
With heartfelt condolences, may you remember the good times with John.Your Villa Valhalla friends; Paul & Becky, Martha & Rob and Ernie & Kate

Posted Feb 12, 2020 at 06:29pm
I was so sorry to hear of John's illness and then passing. I will remember him by his great sense of humor, and just love of life. He was so much fun to be around and easy to talk to, and obviously true family man. No doubt, he will be missed by many.
Comment Share
Share via:
MF

Posted Feb 11, 2020 at 06:23pm
I’m so sorry to hear, I can still hear him shouting over to me as colonial. I have tried to bring his, well all of your warmness as neighbors to my current neighborhood. We are thinking of you

Posted Feb 11, 2020 at 05:51pm
I have wonderful beautiful memories of John. He was a wonderful Uncle to Eric and Jenny and in later years to Nealy. He would always tease me about politics when we spoke on the phone .
Comment Share
Share via:
PT

Posted Feb 11, 2020 at 04:51pm
Barb, Bob & I are so sorry to hear about John's passing. We have so many fond and fun memories of our time living next door to you & John, & the boys. We offer our deepest condolences. 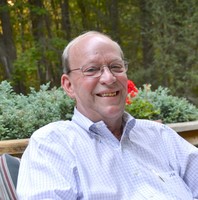