To share your memory on the wall of Joseph Dappal, sign in using one of the following options:

Joseph Dappal, a longtime resident of Northborough and also affectionately known by all as “Papa Joe”, passed away peacefully at the Beaumont Skilled Nursing and Rehabilitation Center, Northborough; he was 95 years old. ... Read More
NORTHBOROUGH

Joseph Dappal, a longtime resident of Northborough and also affectionately known by all as “Papa Joe”, passed away peacefully at the Beaumont Skilled Nursing and Rehabilitation Center, Northborough; he was 95 years old. Joe was born in Youngstown, Ohio, a son to the late Sante and Lucia (Soccorsi) D’Appolonio. He attended Rayen High School and graduated in 1943, soon after graduation, he enlisted into the U.S. Army where he became a brave member of the 82nd Airborne. He dropped into Normandy in preparation of D-Day and served in several active European theatres including the securing of the Rhineland, Ardennes / Battle of the Bulge Counteroffensive operations and the liberation of German concentration camps.

After his honorable discharge from active duty, Joe returned home to Youngstown to assist with operating the family business. In 1950 he married the love of his life, Julie V. (Marinelli) and in April 2020 celebrated 70 years as husband and wife. In 1962 Joe and Julie relocated their family to Stow and shortly thereafter, to Chelmsford before making their final home in Northborough. Joe worked 29 years at AVCO / Textron Systems. During this time he served as a project manager for fire protection applications including the NASA Apollo Program Heat Shield System. He was especially proud of the safe return of Apollo 13. In addition, Joe’s position and expertise involved numerous years of global travel prior to his retirement in 1992.

Joe enjoyed meeting people and finding out about their lives. His charismatic smile and gregarious personality quickly turned strangers into friends. With a deep love for his family, Joe looked forward to any opportunity which would bring everyone together. He enjoyed baseball, football, sharing a laugh and seeing just what his flirtatious smile could help him get away with.

The family would also like to thank Beaumont Skilled Nursing and Rehabilitation Center for the wonderful care that Joseph received.

All services at this time are private, for the family. Arrangements are under the care of Hays Funeral Home, 56 Main Street, Northborough. To leave a condolence, please visit www.HaysFuneralHome.com.
Read Less

To send flowers to the family or plant a tree in memory of Joseph "Papa Joe" Dappal, please visit our Heartfelt Sympathies Store.

Receive notifications about information and event scheduling for Joseph

Print
All services for Mr. Dappal will be private, for the family.

We encourage you to share your most beloved memories of Joseph here, so that the family and other loved ones can always see it. You can upload cherished photographs, or share your favorite stories, and can even comment on those shared by others.

With love, The Kennedys sent flowers to the family of Joseph "Papa Joe" Dappal.
Show you care by sending flowers

With love, The Kennedys

With love, The Kennedys purchased the Dreams from the Heart Bouquet for the family of Joseph Dappal. Send Flowers 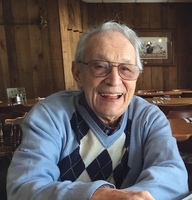