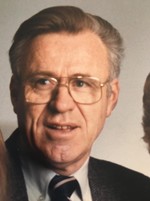 Joseph Hehir, 89, simply known to all as “Joe”, a longtime Northborough resident, passed away peacefully at Dodge Park Rest Home in Worcester after a period of declining health. He was the loving husband of 54 years to Helen M. (Sullivan) Hehir, until death separated them in 2010.

Joe was born in County Clare, Ireland, a son of the late Thomas and Margaret (Conoulty) Hehir. As an immigrant to the U.S.A. in 1950, Joseph remained proud of his Irish heritage throughout his entire life. He is equally proud to have served in the U.S. Army during the Korean Conflict, being honorably discharged. He was a proud member of the Vincent F. Picard American Legion Post 234 and of the Disabled American Veterans.

As evidence to his hard work ethic while married, with two small children and working fulltime in a factory he completed his studies at Northeastern University in 1962. With an exceptional skill and gift for numbers Joseph worked over 36 years as an accountant at Wyman Gordon Co; many of which he served as the manager of Treasury Operations. A testament to his work ethic, Joe had near perfect attendance during his career there.

He was a longtime member of Saint Rose of Lima Parish and for many years assisted the parish with its bookkeeping. Joseph loved playing golf, passed that love onto his son and grandson. Joe built (mostly by his sweat) a summer home in York Maine and was a very special gathering for his family for decades.

Joseph is survived his loving children, Sean Hehir of Campbell, California; Mary Spreadbury and her husband Kevin of Worcester; Patricia Flaum and her husband Marc of Acton; 8 grandchildren, and 2 great grandchildren. He was preceded in death by three brothers, Michael, Patrick and Thomas Hehir.

The family would like to express their gratitude to Dodge Park Rest home for the compassionate care he received during his stay. In lieu of flowers, memorial donations may be made to DODGE PARK REST HOME, 101 Randolph Road, Worcester MA 01606.

Due to the current coronavirus restrictions on group gatherings, all services at this time will be private. Joseph will be entombed in the mausoleum of St. John’s Cemetery. A memorial Mass at and time to remember and celebrate Joseph’s life will be set for a future date. Please keep the Hehir family in your thoughts and prayers during this time.