To share your memory on the wall of Lawrence Beatty, sign in using one of the following options:

Provide comfort for the family of Lawrence Beatty with a meaningful gesture of sympathy.

After graduation Larry and several friends enlisted in the United State Army. Following basic training at Fort Dix Larry was sent to Fort Gordon for Military Police Training and Lackland Air Force Base where he received K-9 handler training. Larry loved his dog; they served closely together for several years. After successfully completing their training Larry and his canine partner were stationed at Bergstrom Air Force Base where they provided security patrol services. After completion of that duty Larry made his way to Fort Hood, Texas where he was eventually honorably discharged as a permanent corporal. During his career in the Army he was awarded the good conduct medal, was a marksman with a rifle, a sharpshooter with the M-1 carbine and an expert with his service pistol. Although assigned to Air Force Bases Larry was always quick to explain that he was regular Army if anyone questioned him.

Larry was always known as a hard worker and was proud that outside of military time, he lived and worked in Northborough for his entire life. During junior high and high school he was employed at Bigelow’s Nursery in Northborough. Upon returning home from the military in July of 1962, Larry began working at the former County Line Sand & Gravel in Berlin and the former Colonial Press Co. in Clinton. In early 1965 Larry began working as a special police officer with the Northborough Police Department. On December 1, 1965, he joined the force as a full-time patrol officer under then Police Chief James E. Carbrey.

Larry was promoted to sergeant in 1983, a position which he served with pride and distinction until his retirement in September of 1993. One of Larry’s favorite assignments was working the voting polls on election days at the Marion Zeh School, where he enjoyed spoiling the ladies that worked there. After remaining single for almost 50 years he married the love of his life, Adele Kelly in July 1991.

People who knew Larry were well aware that he was a hard worker, a trait that he proved time and time again. While working a 40 hour week with the police department Larry also worked full time as a rural mail carrier for the United States Postal Service, a position he held for over 40 years. His knowledge of the town and people made him an invaluable asset to the police department.

Larry was also extremely active in the Vincent F Picard American Legion Post 234 of Northborough. He served as both commander and vice commander of “his” Post. Larry is still known by all members as the backbone of that organization; the one single person who held it all together. He was relentless in his support of the Post and was the significant force behind the return of Legion Baseball to Northborough. He attended every game, his support a major factor in its success. Larry was considered the “Life’s Blood” of Post 234 having a hand in almost every operational aspect of the organization.

He was known for his steadfast and unwavering attitude. If Larry liked you he would do anything for you and if he didn’t like you, well you were definitely aware of it!

Larry is survived by his step-sons Geoff Kelly of Northborough and Scott Kelly of Worcester; his brother Robert A. Beatty of Worcester; his closest cousin, Jackie Osman, cousins Marlene Grenier, Sharon Blood and Robin Williams, all of Florida; Jeff Osman of Marlborough, Brian Osman of North Carolina and numerous other cousins. He also leaves his best friend, Edward “ Dusty” Shead .

We encourage you to share your most beloved memories of Lawrence here, so that the family and other loved ones can always see it. You can upload cherished photographs, or share your favorite stories, and can even comment on those shared by others.

Jim Bagdon and Laurie, Deborah, Daniel and Johnna Carpenter have sent flowers to the family of Lawrence M. Beatty.
Show you care by sending flowers

Guaranteed hand delivery by a local florist
A2

Posted Feb 02, 2019 at 03:42pm
Larry,
Thank you for all that you did for the Vincent F Picard American Legion Post 234. You shall be greatly missed. Soar high brother. Rest in Peace. Your brothers and sisters of The American Legion Riders Post 234
Comment Share
Share via:
LD

Posted Jan 29, 2019 at 12:11pm
Your memory will never fade. I was honored to know you, and to have served next to you. Through your mentoring it was possible to learn and grow. Laughs we shared will always be the first moments remembered. Thank you for being a friend, teacher, mentor and wonderful human being. Heaven's gain is our loss, R.I.P.
Comment Share
Share via:
LG

Posted Jan 28, 2019 at 03:32pm
Rest in Peace Larry. Thank you for your service, and all you did for the Vincent F Picard American Legion Post 234 of Northborough. Our condolences to Larry's family.

Posted Jan 27, 2019 at 03:49pm
Rest in Peace Larry. Thanks for all your support from your friends in Abrams Company.

Comment Share
Share via:
Posted Jan 26, 2019 at 12:58pm
Larry Beatty, Thank you for always waving at me when my school bus rolled by. I felt safer in the neighborhood, knowing you were just down the street. My love to the Kelly boys; I know they will miss you. The Town of Northboro salutes you. RIP. Marty Jones
Comment Share
Share via: 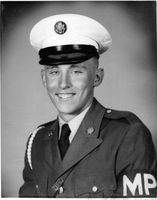