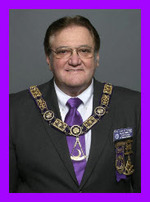 Louis M. Papagni, affectionately known as Lou by all who knew him, passed away peacefully in the Blaire House in Worcester after a period of declining health; he was 73 years old. Lou was born and raised in Worcester, the son of the late Vito and Mary (Sposato) Papagni. He was a longtime resident of Northborough prior to relocating to Boylston. Lou worked in communications for most of his career, many years of which he was in management.

With a strong work ethic and a passion for serving, Lou looked forward to volunteering at the Relay for Life and gave countless hours of dedicated involvement to the work of the Freemasons over the span of 36 years involvement. He was a longtime active member and a Past Master of the United Brethren Lodge of Marlborough prior to affiliating his membership with the Boylston Lodge in W. Boylston. He also served as the District Deputy Grand Master of the 23rd Masonic District in 2009 & 2010. Lou was proud to have been part of a featured article in the Summer 2010 Trowel Communication.

Lou was a fabulous cook and looked forward to spending time in the kitchen. As busy as he was, there was always a project or two around the house or in the yard for him to putter away on. Lou enjoyed golfing and coaching. Most of all, Lou enjoyed being a dad and spending time with his beloved girls.

Lou is survived by his beloved daughters, Lori Nebel of Boylston and Jill Tetreault of Webster; his grandson, JJ Tetreatult and his granddaughter, Mackenzie Tetreatult, both whom he cherished; his former wife, Marcia Papagni, nieces and nephews, and the many Lodge brethren he considered friends.

At this time, due to gathering restrictions, all services will be private, for the family. A time to remember and celebrate Lou’s life will be announced at a future time. Hays Funeral Home, 56 Main Street, Northborough is honored to assist the Papagni Family with services. To leave a condolence, please visit www.HaysFuneralHome.com.