To share your memory on the wall of Peter Scopetski, sign in using one of the following options:

Provide comfort for the family of Peter Scopetski with a meaningful gesture of sympathy.

Dr. Peter J. Scopetski, DDS, passed away on Sunday, April 19, 2020, at the age of 88, from complications from the coronavirus at the Shrewsbury Nursing and Rehabilitation Center. Peter was born in New Britain, Connecticut... Read More
NORTHBOROUGH

Dr. Peter J. Scopetski, DDS, passed away on Sunday, April 19, 2020, at the age of 88, from complications from the coronavirus at the Shrewsbury Nursing and Rehabilitation Center. Peter was born in New Britain, Connecticut, the son of the late Peter M. and Doris (Jackaloski) Scopetski. He was raised in Worcester, where he attended St. John’s High School and studied pre-med at The College of the Holy Cross, earning a Bachelor of Arts degree with honors in 1953. He earned his Doctor of Dental Surgery from Temple University School of Dentistry in Philadelphia, Pennsylvania in 1962. It was in Worcester that Peter met his late wife, Eileen (Dowd), to whom he was married for 61 years. The couple raised six children in Northborough, MA. Eileen passed away in May 2018.

Dr. Scopetski was involved in dentistry for over 30 years, including running a private practice in Northborough for nearly two decades and providing dental services to nursing homes, schools, and correctional institutions in the area. He served in the Army Medical Service Corps at the Brooke Army Medical Center in Fort Sam Houston, Texas during 1954-1956. During dental school, which he attended on the GI bill, he worked summers with the United States Public Health Service during 1960-1961.

Peter loved sports and was a talented athlete, passing on that gift to all of his children. He was a member of the Worcester Tennis Club from the 1960s through 1980s and won several senior tennis tournaments in the New England area during that time. He was a devoted alumnus of Holy Cross College and all of its sports, particularly so during the time his brother, Paul, was a star football player there. Peter also was a lifelong fan of the Celtics, Red Sox, and New England Patriots, and watched many a game at the old Irish Pubs in Worcester. Beyond sports, Peter liked to draw, watch classic movies and listen to big band and “crooner” music of the 1940s and 50s, and keep up with current events through reading newspapers and listening to tv news and talk radio. Peter also loved working in his yard on hot summer and crisp fall days.

Funeral services and burial in Howard Street Cemetery in Northborough, MA will be private, for the family. A memorial Mass and remembrance celebration will occur at a future date.

Peter’s family respectfully requests in lieu of flowers, please consider a memorial donation in memory of Peter to the Northborough Food Pantry, 37 Pierce Street, Northborough, MA 01532. To leave a condolence, or to share a memory, please visit Peter’s Book of Memories at www.HaysFuneralHome.com
Read Less

To send flowers to the family or plant a tree in memory of Peter J Scopetski, please visit our Heartfelt Sympathies Store.

Receive notifications about information and event scheduling for Peter

There are no events scheduled. You can still show your support by sending flowers directly to the family, or planting a memorial tree in memory of Peter J Scopetski.
Visit the Heartfelt Sympathies Store

We encourage you to share your most beloved memories of Peter here, so that the family and other loved ones can always see it. You can upload cherished photographs, or share your favorite stories, and can even comment on those shared by others.

Posted Apr 25, 2020 at 06:38am
From all the Dowd cousins, we wanted to send our condolences, to all of you during this sad time, made even more difficult by the restrictions currently in place. Our thoughts and prayers are with you until we can share them face to face. May Uncle Pete Rest In Peace.
Love, Kathy, Linda, Deb, Moe, Bill, Tom, Patty, Mary & John,

Posted Apr 23, 2020 at 10:25pm
Dear Steve,
We are sorry for your loss and are praying for you and your family at this time. The video of the funeral service is very special and honoring of your dad. The wind was very strong and reminds us how Jesus brings peace out of the storm. May God’s peace be with you and your family.
Love,
Diane, Greg, Matthew and Michael
Comment Share
Share via:
DS

Posted Apr 22, 2020 at 09:39am
It's sad to think you've lost someone so special, and though I can't know what you're going through, I hope that loving memories will help comfort you.
With heartfelt sympathy to Karen, Kevin & the Scopetski family.
Diane Sabatini
Community Advocate 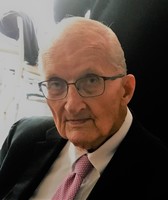