Obituary for Raymond A. "Ray" Jolie 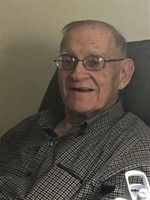 Raymond A. Jolie, 85, of Westborough, formerly of Northborough, passed away peacefully at Tufts Medical Center, Boston, on Wednesday, September 30, 2020. Ray was born and raised in Marlborough, the son to the late Napoleon and Edna (Gardner) Jolie. After his return from the U.S. Army Ray studied business at the former Ward School in Worcester. He would later earn his BS in Computer Science from Northeastern University.

For most of his career Ray worked in the computer field. He was a longtime member of St. Bernadette Parish and in earlier days, an active supporter of Northborough’s Youth Hockey, Baseball and Softball teams. With a passion for performing in Barber Shop Quartet competitions, Ray was a proud member of the Center City 4 quartet. His family will remember Ray as a devoted husband and loving father who would do anything to support his beloved family.

A private funeral Mass will be celebrated at St. Bernadette Parish, Northborough. Burial with Military Honors will take place in Howard Street Cemetery. There are no public services planned at this time.

Arrangements are under the direction of Hays Funeral Home, 56 Main Street, Northborough. To leave a condolence, please visit www.HaysFuneralHome.com.