To share your memory on the wall of Richard Hernandez, sign in using one of the following options:

Provide comfort for the family of Richard Hernandez with a meaningful gesture of sympathy.

Richard H. Hernandez, 89, of Northborough, formerly of San Antonio, Texas, passed away peacefully at Beaumont Rehabilitation and Skilled Nursing Center-Northborough on Thursday, May 21, 2020. Richard was born in Austwell, Texas, the son of the late Julio C. and Lucy (Ybarbo) Hernandez.

After proudly serving in the U.S. Air Force from 1951 to 1955, Richard was honorably discharged from active service and started his civilian career originally as an appliance mechanic for Lack’s Inc., in Victoria, Texas. In 1955 he married Adelpha “Del” Silva and together they enjoyed 57 years of marriage until Del’s passing in 2012.

In 1956, the couple moved to San Antonio where he worked as a jet engine mechanic at Kelly AFB until his retirement in 1998. Richard enjoyed tending to his vegetable garden, meticulously maintained his yard and cared for his home in San Antonio, Texas. He took pride in owning acreage in Natalia, Texas where he would clear trees and mow the vegetation. He enjoyed collecting and restoring vintage VW Beatles.

Richard is survived by his daughter, Kathrine Hernandez Clausen and her husband Mark; a grandson, Tyler H. Clausen. Richard and Del were preceded in death by their son, Richard H. Hernandez II.

Services in Texas will be set for a later date. Hays Funeral Home, 56 Main Street, Northborough is assisting with local arrangements. To leave a condolence or to share a story, please visit www.HaysFuneralHome.com.
Read Less

To send flowers to the family or plant a tree in memory of Richard Henry Hernandez, please visit our Heartfelt Sympathies Store.

There are no events scheduled. You can still show your support by sending flowers directly to the family, or planting a memorial tree in memory of Richard Henry Hernandez.
Visit the Heartfelt Sympathies Store 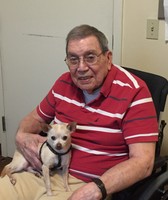