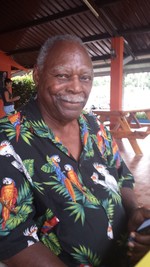 Robert H (Bob) Randolph, 81, a new resident of Southbridge, MA died Friday May 24, 2019 at Harrington Hospital following an illness. Born in Dallas, TX, he was the son of the late Robert C Randolph and Tressie (Jackson) Watson.

Mr. Randolph grew up in Los Angeles, CA and Kansas City, Missouri. He was a graduate of Lincoln High School in Kansas City and held a bachelor's degree in mathematics from the University of Missouri at Kansas City. While working as a computer programmer at Boeing Aircraft in Seattle, Washington, he was a member of the team that worked on the Apollo Spacecraft Mission project. He worked for Digital Equipment Corporation as a software manager and was a senior marketing consultant in the computer industry.

He was a longtime resident of Northborough, MA and spent the last 3 years of his life as a resident of Playa Coronado in Panama, Central America. An avid reader, he enjoyed writing and was a published author. He also appeared in several television commercials that were shown nationwide.

A celebration of his life and burial will be held at a later date and at the convenience of his family. Hays Funeral Home, 56 Main Street, Northborough is assisting with local arrangements. To leave a condolence please visit www.HaysFuneralHome.com.