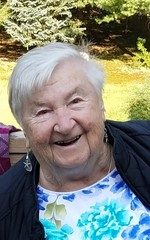 Susann M Tassé passed away peacefully in her sleep on Tuesday. January 15, following a brief hospitalization at St. Vincent’s Hospital in Worcester MA. She spoke with many of her friends and family in the hours just prior to her death, and comforted them all with the knowledge that she was ready to leave this world and move on to her next adventure.

Born in 1932 in Weilau, a village in Transylvania, Romania, Susann was orphaned very young as her mother died soon after her birth and her father was killed in action in WWII. She was raised by her grandparents, and fled with them across Europe at the end of the war as the Russians were advancing on her hometown. After making it to Austria, she was enrolled in an orphan relief program and emigrated to America in 1948. As a result of her escape from battle-torn Europe, she always loved and identified with the story of the Von Trapp family in the “Sound of Music”.

Upon arriving in America, she was fostered by a family in Clinton, New Jersey, where she worked hard to learn English and completed her high school education at North Hunterdon High School in 1952.

As a young adult, Suzanne was hired by Pan Am Airlines to be a flight attendant, and she had many stories to tell of her adventures with the airline. During this period of her life, she met Carolyn Tassé, a fellow flight attendant, and Normand Best, a flight engineer, who remained lifelong friends. Carolyn introduced Susann to Charles Tassé, whom she married in 1957.

After Charles finished dental school, in 1960, Susann moved with him to Northborough MA and helped him establish a dentistry practice in town. Susann and Charles raised three children there, and shared with them all a love of the outdoors, especially skiing, boating, hiking and bicycling. She was also active in St. Rose of Lima parish functions.

Beginning in 1981, Susann lived independently and worked hard to provide the two children still living with her with a wonderful home. In 2001, she moved out of the house she first lived in in Northborough and retired to Shrewsbury Commons, where she lived until her death.

A tremendously social woman, Susann made friends easily, and had a gigantic network of people who knew, respected, and loved her. She enjoyed company and a glass of wine. She was a very accomplished cook, and loved to provide dishes for any occasion. Her expertise led her to a kitchen management position at the Thornton Nursing home for many years.

She had an easy smile, and a folksy wisdom that made her a mentor to many young people who came to know her. She touched many lives, and changed them all. She will be greatly missed by all who knew her.

Susann's family respectfully request that in lieu of flowers, a memorial donation be made to Elder Services of Worcester Area, 67 Millbrook Street | Worcester, MA 01606 | www.eswa.org.