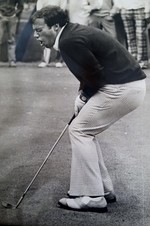 Bill “Froggy” Gerber’s life was full of family, golf and adventure (and his famous mishaps). He relished taking risks and pushed boundaries and convention.

This is how he started every family adventure day much to the annoyance of his sleeping children. It was a carryover from his days as a waterski instructor at Camp Eagle Cove on Fourth Lake in Old Forge.

In the highlight reel of his life you might find him diving into the ocean in the British Virgin Islands to chase after his boat that became untethered from its mooring. When Cuba opened for American tourists, he suggested escaping the strict supervision of his guide to take a joyride in a ‘55 Chevy. Let’s not even talk about that day in the swamp of Browns Tract at Racquette Lake when the kids feared we wouldn’t find dry land before nightfall (and the incoming thunderstorms). Regardless of who was with him, he would assuage their fears by saying “trust me” and you knew this couldn’t end well.

He was a huge fan of college sports and attending an Alabama game with his daughter at Bryant Denny stadium knocked another item off his bucket list.

The first son of William W. Gerber, Jr and Jean Rosenbloom Gerber, he was a lifelong resident of Syra-cuse and the Thousand Islands in New York until he moved to Palm Beach Gardens, Florida in 2008.

A Nottingham High School (1961) graduate, he worked for his father as a salesman at Gerber Distributing (record distributors). In 1964, he jumped at the opportunity to start Shoppingtown Music and Record Shop with a table of 45s and with his father helped grow the business to Gerber Music with three stores and a warehouse that became a springboard for the careers of many local musicians. In 2014, he was honored when Gerber Music was inducted into the Syracuse Area Music Hall of Fame.

Bill was an accomplished athlete and excelled in everything he did, most notably, golf. A scratch golfer, Bill was inducted in the Greater Syracuse Golf Hall Of Fame in 2003. Empire Magazine named him ama-teur golfer of the decade in the 70s. From the Onondaga Junior Championship in 1961 to qualifying for the British Amateur in 1981, he was Syracuse’s winningest amateur golfer for two decades. In between, his wins included the Syracuse District Championship three times, Craig Wood Amateur Championship in Lake Placid twice, and three Syracuse Herald amateurs.

He passed his joy of golf on to teach young kids at Grenadier Island Country Club of which he loved be-ing a member.

A dream came true for him when he finally, after 20 years in the ticket lottery, was able to attend The Masters Tournament in Augusta with his daughter and son-in-law.

On May 23, 2020, William Gerber III gave cancer the win after beating it for many years. In the end, he is the victor because wherever he may be, he hopefully has his beloved game back.

He is survived by his three children of whom he was immensely proud: Lisa (Patrick) Werry, Jacqueline (Raymond) Hobson, William (Kerry McMullen) Gerber; Step-daughter Bess Storch; Bill’s three siblings Leonard (Linda) Gerber, Terri (David Gardiner) Gerber, and Heidi (Bob) Greenbaum; six grandchildren, four great-grandchildren, and a host of nieces and nephews. He is predeceased by his parents and nephew.

A life celebration will take place in Syracuse at a date to be announced when we are able to gather in groups again. You can sign up to be notified when details are available at https://bit.ly/WWGMemorial.