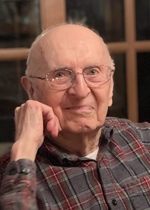 William C. “Bill” Wingler of Boylston, formerly of Northborough and Marlborough, died on Saturday, May 22, 2021, in the UMass Memorial Medical Center’s University Campus after a brief decline in health. He recently celebrated his 98th birthday with his family on February 26th. Bill was born in Scranton, PA on 2/26/1923 and was the son of the late William F. and Orpha J. (Kooser) Wingler. He relocated to Marlborough with the Wingler family at the age of 6. Bill graduated from Marlborough H.S. in 1940 prior to enrolling at Worcester Polytechnical Institute (WPI) through its ROTC program. He graduated from WPI with a bachelor’s degree in Mechanical Engineering in 1944. In 1944 Bill was commissioned as Ensign in the US Navy and assigned to Lt Cruiser Topeka which was built in Boston. Bill spent the last months of WWII as an Engineering officer on the Topeka in the South Pacific and returned to civilian life in 1946 after his honorable discharge.

Bill joined General Electric (Telechron) in September of 1946 as a Design Engineer and remained there for 42 years, 32 of which were with GE and the remainder with Timex and Telechron, Inc. Bill developed numerous patents for these companies, the most notable of which is the mechanism behind the snooze alarm. For Bill’s last 10 years of employment, he was Manager of Engineering and he retired in March of 1989. Bill was a rabid fan of the Red Sox since the 1930’s and also followed the Celtics and Patriots. He was also a longtime season pass holder for UMass Minutemen Football and especially loved the marching band. Throughout his whole life, Bill enjoyed tinkering around his home. He was a master of many trades – carpentry, electrical work, and plumbing - and even built his own home on Lake Boon in Stow, MA. Bill was tech savvy, teaching those younger than himself the ins and outs of home computer usage. He spent time sailing and flying his own plane in his earlier years. Bill was an excellent tennis player who continued playing well into his early 90’s. Bill also loved reading, listening to music, and always looked forward to spending time with his beloved family whether in person or by email and Skype.

Services for Bill are private for his family only. Please consider donations in Bill’s memory to https://americanhumanist.org/ways-to-give/. Hays Funeral Home, 56 Main Street, Northborough is honored to assist the Wingler family at this time. To leave a condolence for Bill’s family please visit www.HaysFuneralHome.com.